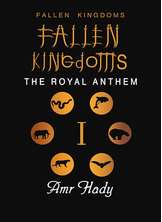 They were dead... All of them
The Great Explosion changes the land, giving rise to the Sacred Figures who are taken as gods by the last men alive. The Holy War starts, and history begins to be written by the blood of noble warriors.
Years later, the savagely clashes resume in bloody conflicts for ruling from the Grand Burg. When the Royal Anthem is called, the struggle for rule changes to a struggle for survival.
When the outsider comes, doom will come with him.
Fallen Kingdoms 1
The Royal Anthem

Adam and Robo in Tokyo

Akira and meki in Cairo

Zahera, Robo7 and the Tree

I Forgot To Be

THE 4 Days of Rami & Nicole

Speed reading is the pave of the glorious2

You Lead Your Life

Ashes of a Lost Country

Growing Up with my Destructive & Narcissistic Parent

The First Barrel of Fortune

All That's in Between

Loneliness Love Musings and Me