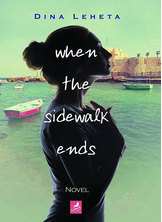 Set in modern day Alexandria, this is a story of four friends who, against the backdrop of their ancient city and the shifting tides in Egypt, must grapple with questions of identity, tradition, freedom, development and change.

Noora is dreaming of falling in love and getting married to a man who would fit society’s standards for a suitable match. When she is unsuccessful, she flees home. But will she be able to find true love elsewhere if she sticks to the same rules?

Meeran is yearning to escape from her parent’s tyranny, even if this means betraying her friend and voluntarily sentencing herself to a different kind of prison, a matrimonial one that her parents approve of. Can the sort of marriage she is seeking save her?

Noha is married and pregnant with her first child whom she believes will make her life meaningful and joyful again. She had been forced by her husband to sacrifice a career she loved and to turn to religion for consolation. Will she find the solace she seeks in her baby and her mother-in-law’s popular yet regressive idea of religion?

Mona has been married the longest and has two kids. Her life seems like every girl’s dream come true. However, Mona is harboring a secret that if uncovered could put her marriage in jeopardy and risk hurting her family. But does she really want to save her marriage? And won’t her family get hurt anyway?

The Democracy of Good Governance on the Method of the Prohpethood

The Mouse and The Lion's Friendship

WHO WINS JANA OR CIRCUMSTANCES ?

Everything is Reduced to Ashes

The Prisoner of Conscience

A Man From No Man's Land