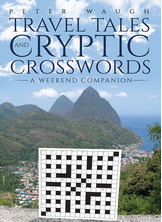 Enjoy a travel tale and a cryptic crossword on each of the 53 weekends possible in a year.

Unconventional, quirky and generally light-hearted, the tales range from circumnavigating the globe by cargo/passenger and migrant ships and driving an ageing car from Paris to Tehran over bad roads in winter and mostly at night, to hitchhiking in kilts around Europe. Selling patent medicine in rural Malaya in the early 1960s, surviving an earthquake and its aftermath in Tehran, and hearing of JFK's assassination from a Chinese gangster in Kuala Lumpur all feature.

There are rants about unsatisfactory toilet blocks in caravan parks and travellers who cap one's stories; raves about Star Bars and Star Stays; essays on Currywurst and the town of Condom; and there are more than 150 photos, a few poems and one recipe.

The cryptic crosswords are modelled on those in The Times, but perhaps slightly easier.

The Three Kings and The Great Gates of Jumeirah

Is It A Ghost?

Clementine and her SUPER FOOD Friends

A Land Without War