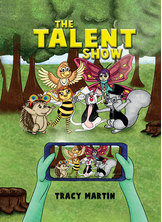 Six friends; Squirrel, Bumble, William, Flora, Matilda and Bernard embark on a journey through a forest, across woodland, fields and miles of open space to reach a neighbouring forest called 'Dark Side Edge'.

The purpose is to take part in a talent competition organised by a badger called George. Forest animals have come from far and wide to join one another and compete for a trip to Wonderworld.

The six friends, joined by Flora's brother Pierre from France, work together to create a great stage act. They make their own costumes, paint a trailer and rehearse until it's perfected.

Join Squirrel, Bumble and the rest of the gang in this truly wonderful adventure.