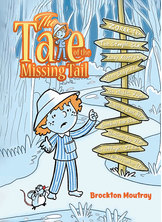 There's no feeling quite as satisfying as knowing someone's there for you through thick or thin, especially when that someone is your best friend for life.

Following a fun-filled day on Grandpa's farm, ten-year-old Joseph lies awake in the middle of the night, unable to sleep. Joseph's obsession with fairy tales, video games and junk food inexplicably leads him into the magical lands of Zorak and Blackberry Bog. There he befriends Pip, a chubby, humorous mouse that stops eating only when his arms get tired. He, like Joseph, is trying to find his way home.

Pip mistakenly drinks some milk that belongs to an evil old man named Wilbur and ends up paying the price. Joseph helps Pip replace the milk despite having to deal with unforeseen obstacles and many unbelievable characters.

Will friendship, collaboration and perseverance help the two friends return home safe and sound? The Tale of the Missing Tail is the first book in the trilogy.

Robo and Adam in Tokyo

Robo and the Arrogant Rabbit

The Lion and The Mouse’s Friendship

I am a Human

The Girl With The Blue Hair