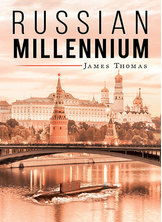 Moscow, 1999, and Russians are preparing for the presidential elections, due in Spring 2000 when Boris Yeltsin would step down. A popular candidate plans to amass a covert campaign fund which he will use to propel himself into the Kremlin.

Baron Pierre de Vincennes, international facilitator to oligarchs and governments, creates the fund through a web of crude-oil transactions. In parallel, the Baron clandestinely acquires a Russian nuclear submarine, laid-up in a naval dockyard. This vessel is re-commissioned and mobilised to its new Arab owners…

The action is exacerbated by two millennium events and the Baron attempts to use the ensuing global political confusion to his own advantage. However, did he miscalculate?

Russian Millennium is a fast-paced thriller, portraying the consequences of ruthless pursuit of power, fuelled by blind ambition, greed and sexual blackmail.

The action unfolds from London to Marbella, Moscow to Geneva and the Black Sea ports of Novorossiysk and Sevastopol.