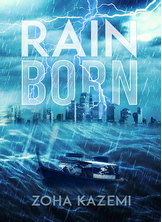 Rain Born takes place many years in the future. After a natural apocalypse, the world is drowned in water and people live on the ships and islands. They have constructed a new religion and a set of rules and have based their political, cultural and economical structure on these beliefs. But these beliefs do not bring prosperity for people. Instead they have made them into victims of the vicious religious leaders who always seek more power and more wealth. It is the people who have to pay for the greed of their leaders by fighting in a war that is based on a lie.

Although people are struggling between their faith and survival, drowned in the complexities of their self-constructed and controlling rules and values, nature is taking its course. Evolution is seeking to select the new, evolved babies that seem to be more compatible with the new water world.

TIRAD is one of the disciples that teach the religious NARRATIVES OF THE SAVIOUR--the man who was the founding symbol of the post-rain world. He is a keen and dedicated follower and a true believer who has decided to ignore the corruption signs and waiver the possibility that his religion is based on no true facts. But in a turbulent path set forth to him by the Saviour Circle, he faces many challenges that shake his rock-hard beliefs; it is a journey of love, loss and fate that changes his destiny.