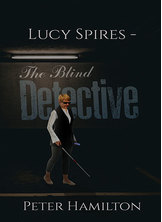 Detective Chief Inspector Lucy Spires has a successful career of almost 30 years in the local North East Police Service. She is currently working on a case of multiple murders of prostitutes where the attacker is taking trophies from his victims.

She is also tracking a drug lord and as she nears bringing him to justice, she is blinded in a near-fatal road accident meant to end her life.

Two months after the devastating news of losing her sight, her determination and strong will give her the strength to start and re-build her shattered life.

She realises that she has been given a second chance, having to adapt to a whole new way of living.

Following this awful attempt on her life, she is invited by the police force to go back to work for them in an advisory role, as they have so far not been able to apprehend the serial murderer.

Coming back to work, Lucy goes on to solve this complicated case using her other senses.

Using her razor-sharp mind to solve further puzzling cases, losing her sight unlocks a new way of working and bringing criminals to justice.