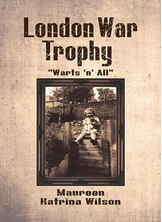 Post-war Londoners managed to survive despite lost and broken relationships, war-damaged surroundings and food and clothes rationing. A strong sense of comradeship was found in the groups, clubs and other social bodies that evolved during this time, while exploiting one's individuality was also not forgotten. Materialism, heavy politics and checking whether one's words and actions fitted into a heavily prescribed 'correctness' were almost unknown factors, but despite this, there was less polarisation of thought and fanaticism.

This autobiography goes into explicit details of childhood, adolescence, family life, schools, churches, youth projects and the world of art in the 1940s, '50s and '60s. It also outlines an individual's finding and acceptance of the Christian faith.