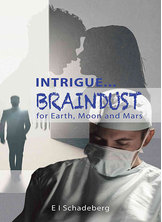 When he was at university, just a few years ago, Laszlo Goran had no shortage of affairs with women there. Now all he wants is to have Audrey for himself. But it is impossible. She belongs to the most powerful man on Earth, Jordan Rathbone--Jor, as the population refers to its beloved leader.

Even though Laszlo is the best neurosurgeon in the world and arguably the most popular individual, his lust for Audrey and power consumes him like a cancer. He orchestrates rebellion among the population, engineers kidnapping, conducts mind-altering brain surgery and indulges in bribery to undermine Jor's authority--all to no avail. Jordan Rathbone is surrounded by his adult son, daughter and her boyfriend and half of the population practicing unarmed combat and mind power.

Meanwhile, the first attempts of mankind to start small colonies on the Moon and Mars are fraught with peril as lack of oxygen causes health complications and tempestuous dust storms threaten their daily lives.

It has been only about a hundred years since Neil Armstrong walked on the Moon and the world of 2067 is already vastly different to the world of 1969. After the devastating wars during the 2020s, the four most powerful nations in the world outlawed all wars, bringing the ruling that money is to be spent on education, physical fitness and interplanetary expansion, having scrapped the idea of finding humanoid life in the surrounding galaxies.

A page turner, Intrigue… Braindust for Earth, Moon and Mars builds on modern technological, neurological and space developments to project a world that is intended to be perfect but isn't, because humans cannot change their basic nature.