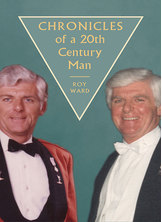 Chronicles of a 20th Century Man

Uniquely The Royal Corps of Signals and The Institute of the Motor Industry celebrate their centenary in 2020. The author served for 25 years in the former and was Director General of the latter for 18 significant years in its development. In addition he held a number of other high profile appointments as well as active involvement in a variety of charitable organisations.
In this book he recounts incidents both amusing and serious that have shaped his life and those dear to him. He believes, along with many of his contemporaries, that he has lived in a golden age to be British and the easy to read pages of this book tend to prove this philosophy.
Born in Stratford upon Avon and living in Warwickshire for his schooldays, National Service was the start of what he calls his adventurous life. The book is a very personal account of life in the twentieth century and his involvement with some of the people who played a major part in the history of his time.