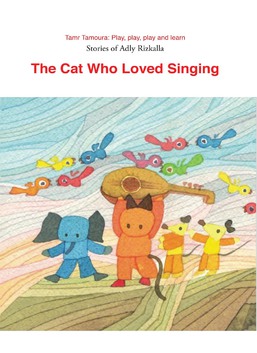 The Cat Who Loved Singing

Since the beginning of history, humans have tried to explain life and the marvellous phenomena of the natural world with myths and legends. This is how all of them have been born throughout the world. At first they all resembled one another, but with time and distance they began to diverge so that each people developed their own folk tales. The brothers Grimm of Germany were the most famous compilers of folk tales, and their books became the source for children’s books around the world. The tales of Hans Christian Andersen also had their origin in folk tales.

The stories of Upper Egypt are my inspiration; they influenced me as a child and the style of the Upper Egyptian storytelling is one of the features of these stories, which I hope will prove an inspiration to your own children. Telling stories in Upper Egypt is the preserve of the elderly. Children gather round to listen to the stories told of a nighttime conversation. The younger men worked in the fields, and would go to bed early, leaving the elderly free to pass on their lore to the young, applying their wisdom and knowledge to stories, stimulating their curiosity and inspiring them to solve problems, ask questions, and learn.

I Never Had A Daddy! The Story of Prophet Jesus (Esa)

The Miracle Man The Story of Prophet Jesus (Esa)

I am a Human

Prophets - Hud - The Worst 8 days ever

Out of The Blues

Was it A Beautiful Dream?

The Miracle before the dangerous storm