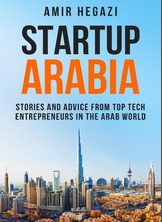 Stories and Advice from Top Tech Entrepreneurs in the Arab World

The year: 2005. The place: Dubai. I had just landed at Dubai International Airport for the first time. This had to be the biggest airport I’d ever been to. I didn’t recall ever seeing immigration lines this long. Where were all these people coming from, and where were they going? Dubai sure seemed to be a travel hub connecting east and west.
I came to realize later that Dubai was also a sort of international oasis, drawing folks from everywhere set on finding something they didn’t have back home. For some, Dubai represented a chance; for others, an opportunity. For both, it offered hope. This sure was starting to feel all too reminiscent of “the American dream” and the story of New York at the turn of the 20th century. Could Dubai possibly be the new New York at the turn of the 21st century, or was it all just hype? I was about to find out.
As I stepped outside the airport, I was greeted by the sprinkling water fans at the sidewalk attempting to cool off the steamy air. Even past midnight, you could feel the warm, moist air. It made me wonder, “How hot does it really get here?” This was late spring 2005; Dubai was certainly warm and about to heat up, literally and figuratively.
As I rode in the cab through Sheikh Zayed Road, the lifeblood highway that cuts across the city, my eyes were fixated on the tall skyscrapers surrounding us. “Amazing, right, sir?” I heard my southeast Asian taxi driver ask. “None of this existed just two or three years ago,” he proceeded to tell me in a semi-British accent. He was right. It certainly was amazing. Equally impressive were the cranes in the background that spread through the desert and seemed to stretch forever. I recalled hearing that 50 percent of the world’s cranes were in Dubai at the time, all in just one, a small emirate with no more than 1.5 million residents.
This wasn’t like anything I had expected. Sure, I’d lived in the Middle East before, in Egypt, where I grew up. I’d also heard all about Dubai and how fast it was growing, but for all I knew, this part of the Middle East was new to me. In spite of priding myself on staying connected to my Arabic culture during the dozen years I had lived in the United States during my adulthood, I might as well have been a foreigner. Riding around the city, I tried to take it all in. Little did I know or could have imagined the transformation that was going to take place here just a few short years later. Dubai had certainly set the tone for many things to come in the region.
This trip was the first leg of an extensive business development roadshow I had planned with my CEO at the time, covering a dozen countries in the region. I was working at a multinational startup back then, overseeing the region, a region I soon realized I didn’t know much about after all. Our company was a pioneer in the online video space, well before YouTube, Netflix, Amazon Video, and Hulu. We were going to be traveling throughout the region, meeting television broadcasters to pitch them on joining our online live streaming platform. We eventually signed every top television broadcaster and media company in the region on an exclusive basis for all their digital rights. It was my first encounter doing business in the region, and it was an adventure in every sense of the word.

The Secret in The Scrolls

Meki and Akira in Cairo

Why the other Valley?